Maranges is a series of complexities, or even contradictions:

Although the basic wine description is AOC Maranges, you really have to think of Maranges in plural – Les Maranges – as there are three producing villages: Cheilly-lès-Maranges, Dezize-lès-Maranges and Sampigny-lès-Maranges, though none wore the name Maranges until the end of the 19th century.

Although Les Maranges are in the Saône-et-Loire départment, and the terrain is becoming more and more complex (no-more the single east-facing hillside of the Côte d’Or) Les Maranges is a clear continuation of both the geography and vines of Santenay – itself, a rather complex and sometimes disparate range of vineyards. This helps cement Maranges as the last outpost of the Côte de Beaune.

Despite this clear geological connection to the Côte de Beaune, and wines that can offer much more than just ‘fleshy and characterful’, you might find excellent 1er Crus in local cellars for €8-14 (tax included), those that carry the name of a Beaune négoce may start at closer to €15, but here the trade element must be factored-in.

Burgundy wines have the highest number of AOCs in France. Until 2017, all Burgundy wines were AOC/AOP wines, with Vin de Pays being a new appellation for this region. The concept of “terroir”, i.e. Land and soil, is very important among Burgundy wines. Of course, you should just look at a map. Basically, the AOC of Saint-Aubin is one valley over from the main one. What the map makes clear is that you can think of Saint-Aubin as being divided in two parts by Gamay (the village, not the grape). There's the Saint-Aubin that lies on the hill of Montrachet, just to the east of Gamay. Burgundy Wine Map. Burgundy wine (French: Bourgogne) is wine made in the Burgundy AOC region of France. Most wine produced here is either red wine made from Pinot Noir grapes or white wine made from Chardonnay grapes, although red and white wines are also made from other grape varieties, such as Gamay and Aligote respectively.

There had previously been some mining interests in the area, but that transient workforce had largely moved on by the late 1800s – it seemed that only vines and farming were left to sustain the soul. In 1895, it is said to avoid confusion with the town of Decize (in the Nièvre), Dezize applied to change its name by incorporating the name given to the local vineyards – Maranges – just as likely it was to help boost the potential sales of wine in an area of diminishing population. This first application was turned down after neighbouring village of Cheilly pointed out that the largest part of the vineyards known as Maranges were actually within their boundaries. After some consideration, and another two years, a joint application by Dezize and Cheilly was approved, so on September 4, 1898 they became xxx-lès-Maranges. The village of Sampigny, much closer to Dezize than Cheilly, joined them on October 29, 1899.

Despite the name-change for the three villages, Maranges still had little renown, a fact underlined in 1937 when the AOC for vines was awarded as ‘Côte de Beaune’. Despite well over 200 hectares of vines, the produce of those vines were known only to merchants who used the wine as a component for their ‘house’ blends.

I read a quote somewhere:

“The charmingly old-fashioned homes of the winemakers provide perfect subjects for a painter’s brush.”

I would add not just on canvas – many houses might do with a lick of paint too!

Dezize-lès-Maranges
Dezize seems a typical, small, regional wine-producing village of small, sometimes steep streets and old churches – there are less than 200 residents. Perhaps because it clings to the hillside, there is much here that reminds me of Pernand – except that Corton/Charlemagne Grand Crus have allowed Pernand to be be better maintained. The village is dominated to the north-east by the Mont de Sène – here is where the prime vineyards are to be found – more often called the Montagne des Troix Croix whose panorama tops out at an altitude of 521 metres – from some vantage points the ‘Montagne’ bears more than a passing resemblance to the hill of Corton and it is a lovely place to walk and worth visiting the three crosses on the summit just for the views. Dezize itself is the highest village of the three, sitting at an altitude of approximately 320 meters

Sampigny-lès-Maranges
Sampigny was once occupied by monks, hence, is one of the oldest villages in the region and is perhaps older than the other two villages in our trio, it is also the smallest with ~150 inhabitants – and to give an idea of how small and far apart these villages are – as the crow flies, Sampigny is less than 1km from Dezize, at just 240 metres altitude. It is believed that the monks created the vineyards of Maranges, of which the commune of Sampigny accounts for 116 hectares.

Burgundy Aoc Map Of The World

Cheilly-lès-Maranges
Cheilly is a pretty village just 2km from Dezize, if you can fly. The Rue des Maranges runs north from the village towards the vines, but first it must cross over the river Cozanne. For a small town of less than 500 inhabitants, there are two old buildings of note; a 9th century church and a 13th century priory. Cheilly, like Sampigny, sits lower on the hill than Dezize, at 240 metres altitude.

“Maranges is where the ‘Golden Slope’ comes to its end … but this is nevertheless still part of the heart of Burgundy.”
Clive Coates

Maranges is the youngest AOC of the Côte de Beaune – receiving its certification for both Villages and 1er Crus in 1988, before that you probably still drank the wines, but with a Côte de Beaune-Villages label. Since then Maranges of both Villages and 1er Cru have been availalble; Twelve climats are entitled to the 1er Cru label, but in practice it is more like seven. According to the BIVB, the current area under production is:

Those main climats classified as 1er Crus are:

As you will see in (for instance) Clos Roussot and La Fussière there are potentially others that could bring the total up to 12 different 1er Crus, but in this flexible world I still doubt whether all would actually be allowed on the label. Those labels are designated Maranges 1er Cru plus the vineyard name, or may simply be labelled ‘Maranges Premier Cru’ in which case it may also contain blend wine from one or more 1er Crus from within the Maranges AOC. Whilst you are hardly likely to come across them, the Villages lieu-dits are:

And, of-course, any of the above can still take a Côte de Beaune-Villages label, indeed I have also seen 2008s with the label “Maranges, (then next line) Côte de Beaune, (next line) Premier Cru Clos Roussots”!

The Premiers…
Figures for the size of the vineyards seem rather flexible: Large signs erected in the vineyards give one number, Jasper’s book brings another number, finally the growers association delivers a third number – oh-well! 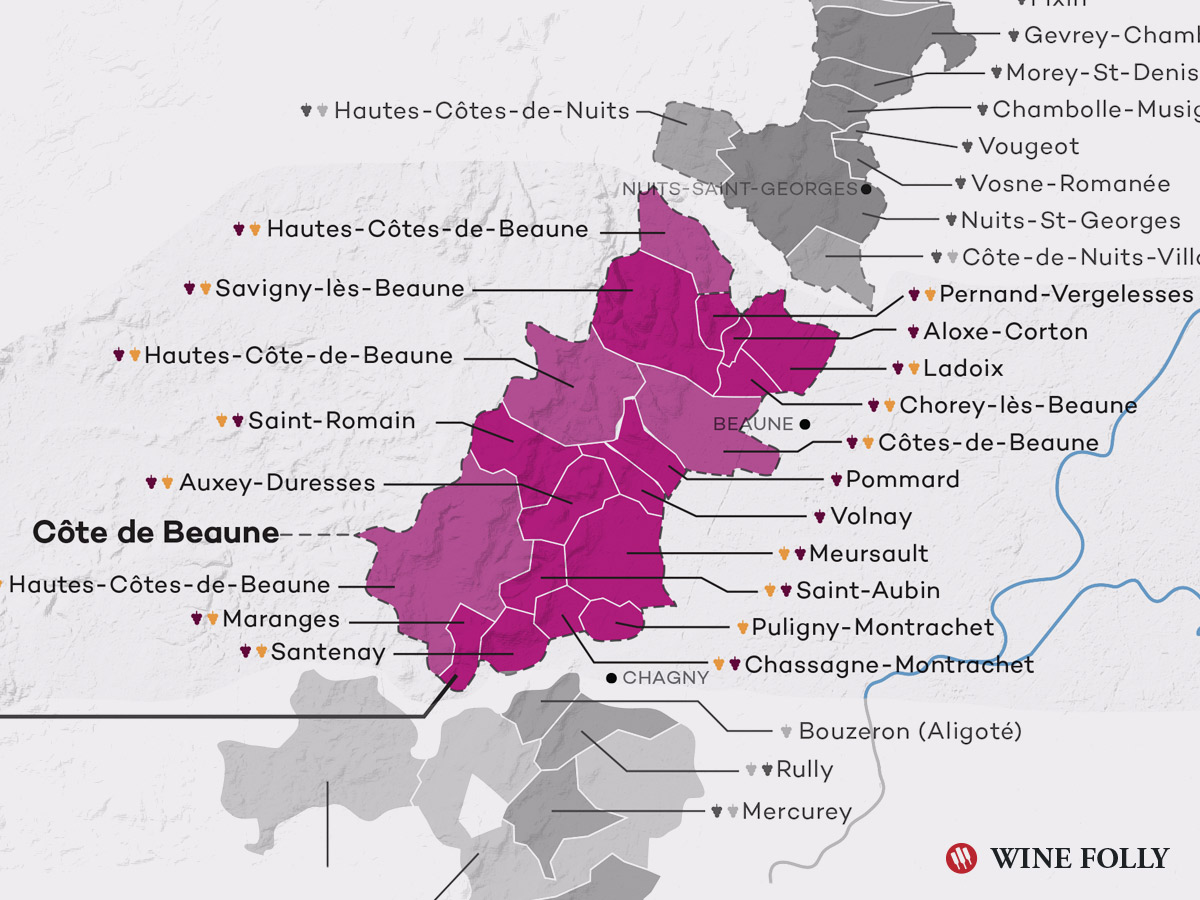 Bouzeron is an appellation d'origine contrôlée (AOC) for white wine produced in the French communes of Bouzeron and Chassey-le-Camp in the Côte Chalonnaise subregion of Burgundy.[1] Bouzeron wine is produced from the grape variety Aligoté, and Bouzeron AOC is therefore the only communal-level Burgundy appellation for Aligoté-based wines. Other Aligoté wines from Burgundy are restricted to the regional appellation Bourgogne Aligoté AOC, and all other white Burgundy wines from communal appellations (except Saint Bris AOC) are Chardonnay-based. However, Pinot blanc is technically allowed.

The wines of this appellation are more similar in style and fruit characteristics to Pinot gris than to Chardonnay. The wines tend to be light bodied with subtle spice notes that are usually most vibrant up to five years after vintage.[3]

Pinot noir- and Chardonnay-based wine are also grown in the same geographical area but are typically sold under the regional appellations Bourgogne Rouge and Bourgogne Blanc.[4] They could also be sold as Bourgogne Côte Chalonnaise AOC, but not as Bouzeron AOC.

The AOC regulations require 100% Aligoté for Bouzeron, and a planting density of at least 8,000 vines per hectare. The allowed base yield is 55 hectoliter per hectare, and the grapes must reach a maturity of at least 9.5 per cent potential alcohol.[6]